Watch: Lionel Messi turns Venezuela inside out with insane dribble 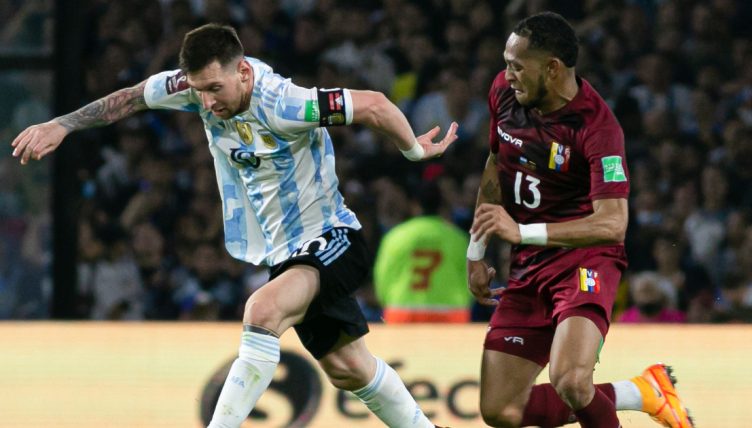 Lionel Messi was back to his best in Argentina’s 3-0 win over Venezuela at La Bombonera in Buenos Aires, and the crowd were bowing down to his greatness as he inspired his country to victory in their World Cup qualifier.

The 34-year-old scored the third goal in the game to seal the victory, but he looked back to his best amidst a season where he has struggled at times in his new adventure at PSG.

A moment that showed that Messi is far from finished came when he went on one of his trademark dribbles, where no one could stop him.

Shortly after his goal, Messi picked the ball up on the halfway line, fighting off the challenge from Jose Andres Martinez, before embarking on a run that took him to the opposition box.

His attempted layoff to Elche striker Lucas Boye was intercepted, but his run showed that contrary to what his critics have said this season, his mobility and skill still remain at a world-class level.

Messi was recently booed by PSG fans after their humiliating Champions League exit at the hands of Real Madrid, and his former Barcelona teammate Thierry Henry was stunned at the reaction from the fans.

“Last week, PSG fans booed Messi. How can you boo the greatest of all-time? The guy that has assisted the most goals in Ligue 1?,” Henry stated on Amazon Prime France after PSG’s heavy defeat to Monaco in March 2022.

“Today, without Messi the team created nothing.”

Whilst Messi only has two goals in Ligue 1 this season, he has 11 assists to his name, as well as five goals in the Champions League.

Although he doesn’t look quite as happy as he did at Barcelona, the greatest players don’t lose their ability overnight, and this dribble shows that Messi is still capable of the extraordinary even after all these years.