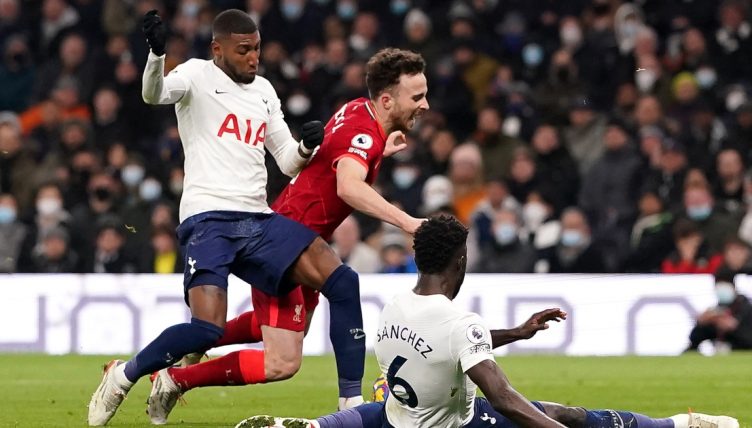 Liverpool players were left fuming with the referee and VAR during the first half of their game against Tottenham.

Tottenham, who were playing their first game in two weeks, took an early lead through Harry Kane’s second Premier League goal of the season.

But Kane was arguably fortunate to only receive a yellow card for a reckless challenge on Andy Robertson in the 19th minute.

Jota made his way into the Tottenham penalty area again a few moments later but was then shoved to the floor by Emerson Royal.

The Portugal international appealed for a penalty but referee Paul Tierney waved play on and VAR didn’t feel that it was a clear and obvious error.

“There were eight penalties last week, whether the referees have thought this week we’re not giving them, it’s got to be something really big,” Jamie Carragher said on Sky Sports.

“Newcastle should have had one earlier this afternoon and it’s a blatant penalty.”

And YET again.. where does the Tottenham player get the ball from Jota? That’s a penalty #TOTLIV pic.twitter.com/Y4YKlpKnrI