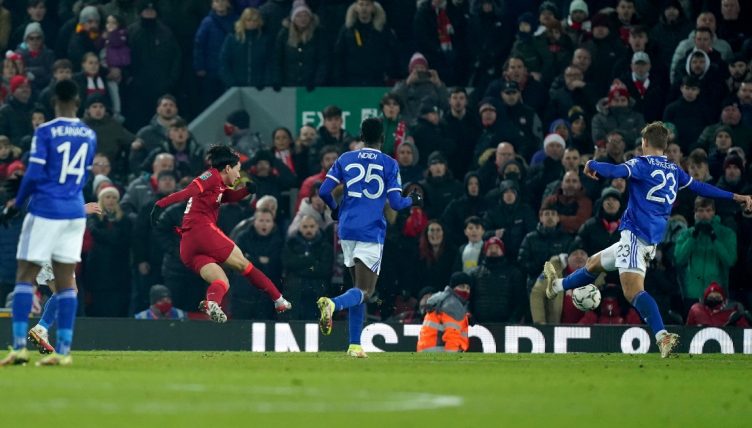 Liverpool and Leicester City played out a brilliantly entertaining six-goal thriller at Anfield on Wednesday evening, with Takumi Minamino pushing the match to penalties in the dying seconds.

Japan international Minamino featured in a much-changed Liverpool XI as Jurgen Klopp rotated heavily for the League Cup clash amid some positive covid cases in the camp.

The likes of Alisson, Sadio Mane, Mohamed Salah and Virgil van Dijk were out of the squad entirely, while youngsters like Billy Koumetio, Conor Bradley and Tyler Morton were given a chance.

Jamie Vardy scored twice in the opening 13 minutes before Alex Oxlade-Chamberlain got one back, then a sensational long-range strike from James Maddison gave Brendan Rodgers’ Foxes a 3-1 lead at the break.

Klopp called upon more experience at half-time, bringing on James Milner and Diogo Jota, plus Naby Keita a short while later, to play alongside Roberto Firmino and Minamino.

Jota scored Liverpool’s second on the 68th minute and Minamino completed the comeback in the fourth minute of added time, converting after a deep cross wasn’t defended properly by Leicester.

Minamino missed his penalty in the subsequent shootout, but Liverpool booked their place in the semi-finals regardless after Caoimhin Kelleher saved spot-kicks from Luke Thomas and Ryan Bertrand.

Minamino brings life back to Anfield#LIVLEI