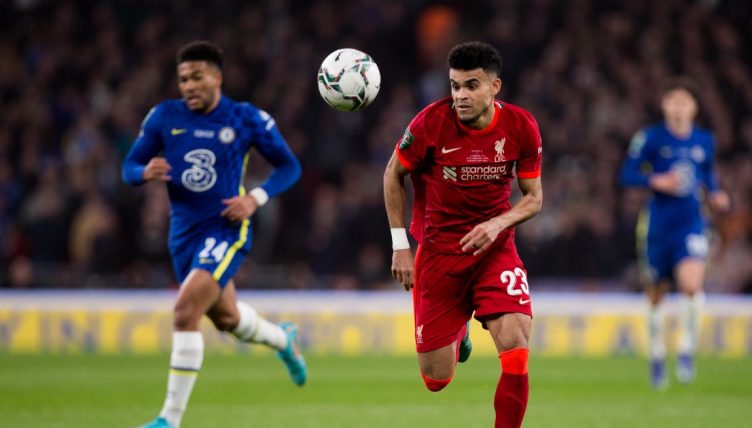 Liverpool’s Luis Diaz produced a sensational piece of skill followed up by a no-look pass against Chelsea in the Carabao Cup Final.

Diaz’s side lifted the trophy after winning a thrilling contest 11-10 on penalties after both normal and extra time finished goalless.

With the match heading towards injury time, Andy Robertson played the ball down the left wing to Diaz who was immediately put under pressure by Reece James.

But with his first touch, the Colombia international flicked the ball up and around James before squeezing past him on the opposite side.

With his second touch, he then produced an audacious no-look pass to pick out Sadio Mane, but the Senegal international could only send his cross high and over the Liverpool players in the box.

It was a brilliant piece of play from Diaz, who was a constant threat throughout his time on the pitch.

His performance demonstrated why Liverpool paid around €45million for him upfront in January this year to provide another attacking option to Jurgen Klopp’s side.

“I think he could make a massive difference to Liverpool at this stage of the season not just because of his performances, he was brilliant today but you think what Liverpool’s team would have been if he hadn’t signed,” Jamie Carragher said after the final.

“[Diogo] Jota wasn’t right, [Roberto] Firmino missed out so you would’ve gone into the game with just [Mohamed] Salah and Mane and maybe [Takumi] Minamino and [Divock] Origi who we know isn’t quite at their level whereas Diaz is at their level.

“This fella could make a huge difference for Liverpool in terms of winning trophies.”

Diaz and Liverpool will have their eyes set on even more trophies, with Klopp’s side in contention for all three of the Premier League, FA Cup and Champions League.

Look at this touch from Luis Diaz to get around from Reece James. This guy is the real deal pic.twitter.com/2m3qiq5u8N