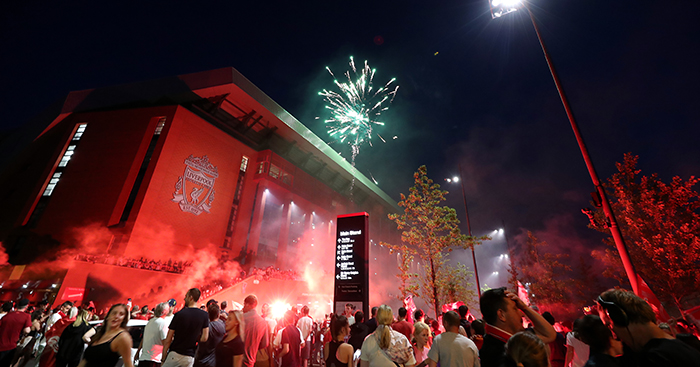 Liverpool ended a 30-year wait for a league title on Thursday night – and their players certainly enjoyed counting down the final moments of that era as they gathered together at a secret hotel.

After thrashing Crystal Palace 4-0 on Wednesday night, the Reds squad watched Manchester City’s game against Chelsea knowing they would be confirmed as champions if Pep Guardiola’s side failed to win.

Things got off to a good start when Christian Pulisic put Chelsea ahead then, after Kevin De Bruyne had equalised, Fernandinho was sent off for a handball on the line, with Willian converting the penalty 12 minutes from the end and putting Liverpool supporters all around the world on alert.

And sure enough, Chelsea saw out what was a crucial win for them in their battle for a top-four spot to end 30 years of hurt in the red half of Merseyside and let the celebrations begin.

Fortunately for us, the very moment Liverpool’s players were confirmed as the best team in the land again was captured on camera as they watched the last few seconds of City’s defeat at an outside screen before erupting.

The lads’ celebration from r/LiverpoolFC

The curious career of David N’Gog: From going AWOL to retiring at 31