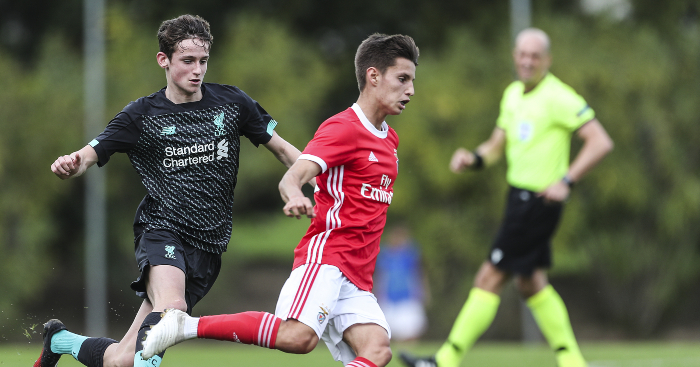 Liverpool‘s Under-19s had a day to forget with a heavy defeat to Benfica in the UEFA Youth League – but Tyler Morton at least produced one moment of inspiration for fans to enjoy.

The Reds’ youngsters travelled to Portugal for the round of 16 clash but were without influential duo Curtis Jones and Neco Williams, who were involved with the first team’s FA Cup tie at Chelsea.

Despite including the likes of Harvey Elliott and Ki Jana Hoever, who have experienced first-team football under Jurgen Klopp, Liverpool were thumped 4-1 by their Benfica counterparts.

Liverpool were tailing 3-0 after just 26 minutes before Morton produced a stunning strike to pull a goal back.

But after Benfica restored their three-goal lead, Sepp van den Berg was sent off for a professional foul midway though the second half.

And Leighton Clarkson saw red in stoppage time for kicking out during a heated clash as Liverpool crashed out of the competition.