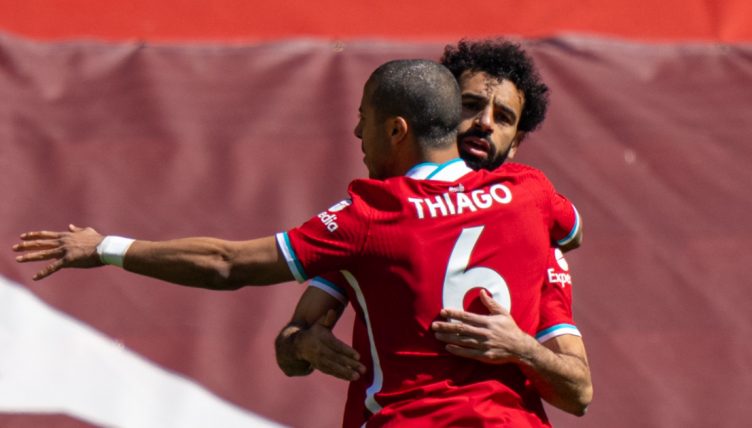 Mohamed Salah and Thiago Alcantara are two of the best players in the world, and they continued to show why in Liverpool’s win away at Burnley.

Fabinho’s goal meant it was a hard-fought 1-0 victory for Jurgen Klopp’s side rather than their usual thrashing, but Liverpool still left Turf Moor with all three points.

The pair really showcased their immense technical ability in the second half when Thiago controlled an aerial ball with his chest before sending a perfect half volley towards Salah on the right.

Salah sent the ball forward with his shoulder, before taking it down with a cushioned touch on his left foot, much to the amazement of the travelling Liverpool fans.

The Egypt international has hit a different level this season, with 16 goals and nine assists in 22 league games, and hasn’t seemed to miss a beat after returning from AFCON heartbreak with Egypt.

Salah is yet to sign a new deal to keep him at Anfield, with his current contract expiring in 2023, and there would be no shortage of interest in the 29-year-old.

But Jurgen Klopp has praised the star and stated that top quality players can continue their quality at an older age, indicating that he would be happy to extend Salah well into his thirties.

“One or two years ago the first three players of the Ballon d’Or, apart from Salah who is slightly younger, were all 34 or older,” Klopp said before the Burnley game.

“Lewandowski is 33, then Messi and Ronaldo are 34 and 37 and if you are lucky enough to get through a career without major injuries you can play long.

“There is no peak mid-20s. The massive advantage of early 30s, mid-30s is the player can see things in the right way having learned in his career.

“He can use that and he can be an even better player than he was a few years before and that is the plan with all of them. There is no age roof.”