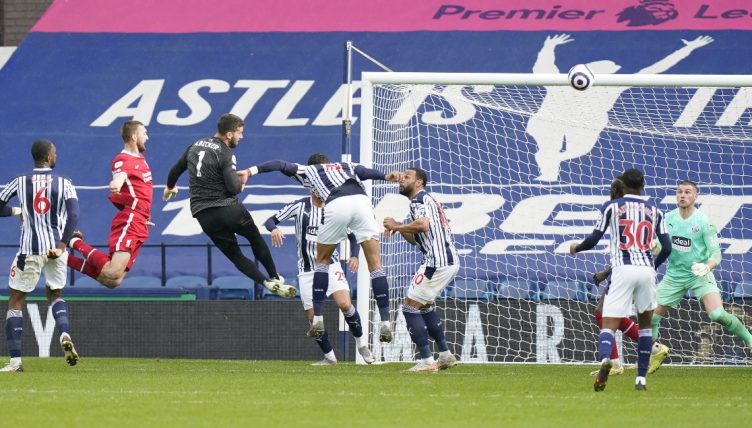 An unbelievable injury-time header from Alisson secured Liverpool a crucial three points in their hunt for a top-four spot away to West Brom on Saturday.

After the death of his father earlier in the season, it is a moment that will live long in the memory of the Brazilian and every Liverpool fan around the world.

Mo Salah’s excellent first-time strike cancelled out an early finish from Hal Robson-Kanu to ensure the sides went into the break level.

West Brom had a goal ruled out for offside early in the second period. Semi Ajayi’s flicked header was poked home by Kyle Bartley but Matt Phillips was adjudged to be stood in Alisson’s line of sight from an offside position.

It proved decisive too. Deep into injury time, Liverpool won a corner and the Brazilian was sent forward. For whatever reason, he simply was not marked by the Baggies defence, and he was free to head home Trent Alexander-Arnold’s cross.

Footage later emerged of the Liverpool bench wildly celebrating the goal, including Rhys Williams, Jurgen Klopp and every other member of the coaching staff. What a moment. You can watch it below.