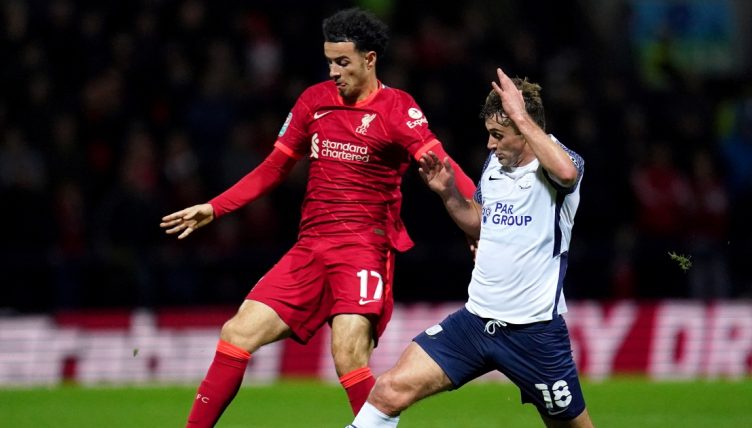 Curtis Jones delighted the watching Liverpool fans by showcasing his brilliant skills during their 2-0 win over Preston in the Carabao Cup.

Jones had seemingly fallen down the pecking order following the rise of Harvey Elliott, who returned from his loan spell at Blackburn and started all four of Liverpool’s opening Premier League games in 2021-22.

But Elliott’s ankle dislocation has seen Jurgen Klopp turn to Jones, who has grasped his opportunity with both hands in recent weeks.

The midfielder scored a brilliant goal in their 3-3 draw with Brentford and also produced a Man of the Match performance against Porto in the Champions League.

After coming off the bench in the 5-0 win against Manchester United, he was then part of a completely changed Xl for the trip to Preston.

During the second half, the 20-year-old skipped past a defender with some brilliant footwork before producing a Ronaldinho-esque flip-flap that left his opponent off balance.

Takumi Minamino then broke the deadlock in the 62nd minute before Divock Origi produced a brilliant improvised finish with his heel to seal their place in the quarter-final.