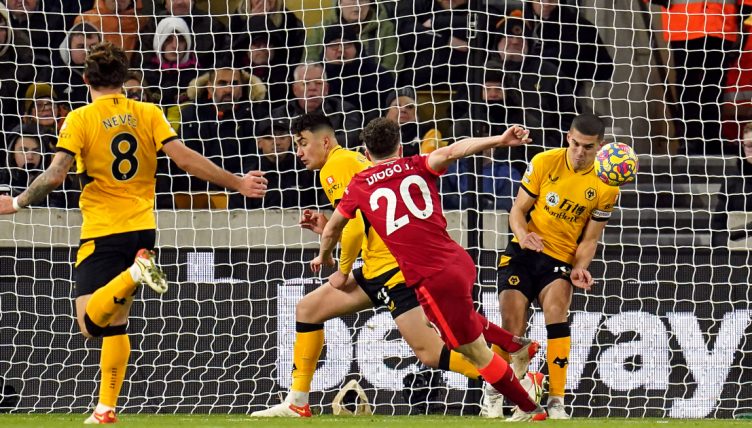 Liverpool’s Diogo Jota missed a gilt-edged chance to break the deadlock and put his side in front against Wolves at Molineux.

Jose Sa, the Wolves goalkeeper, ran out to meet a long ball as Jota chased it down for Liverpool but he collided with his own team-mate and missed the ball.

Jota was therefore given a clean run-through on goal, with only two Wolves defenders able to sprint desperately towards the goal in a vain attempt to make a block.

One of those included Conor Coady, who had been playing through a knock he received earlier in the match.

Jota had the time and space to pick his spot and put Liverpool ahead but fired the ball against Coady’s midriff, who got back in time to produce a heroic goal-line block.

It was a shocking miss from a chance that Jota would have expected to score from, especially given his good run of goal-scoring form.

Fortunately for the Portugal international, Divock Origi came off the bench to score a late winner for Jurgen Klopp’s side.

Miss of the season from Diogo Jota. #LFC pic.twitter.com/ljH7STabcD