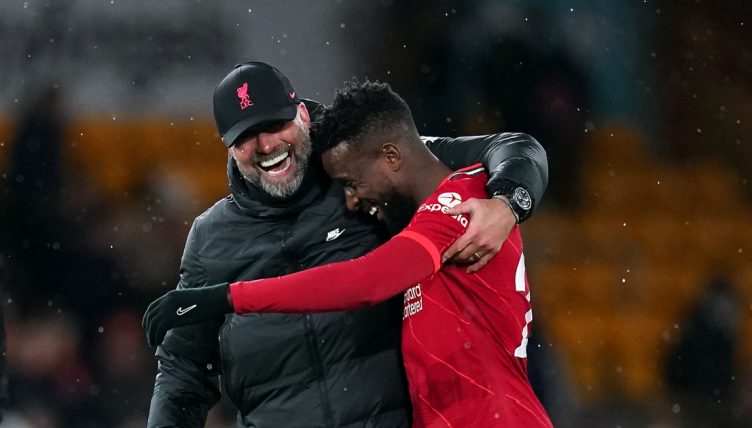 Liverpool manager Jurgen Klopp couldn’t hide his delight after Divock Origi came off the bench to score an injury-time winner against Wolves.

Origi, who has developed a reputation as Liverpool’s super-sub, latched on to a Mohamed Salah pass before smashing the ball beyond Jose Sa in the Wolves goal.

The goal sparked wild celebrations on the touchline and Klopp also ran straight to the centre circle to hug the striker after the full-time whistle.

“He is great in these moments, he doesn’t need a lot of run-up or time to find into a game, and especially not in this game today,” Klopp said in his post-match press conference.

“It was his game, he could be Divock Origi 100 per cent: in and around the box, use your body, use your technique, finish the situations off. He was unlucky with the ball before I think, he was involved in a lot of good moments, he was a threat before he scored.

“These kinds of goals we see plenty of times in training and everywhere. Winning in the 95th minute is great, but when Div scores the goal it makes it even better, to be honest.”

Klopp heads straight for Origi at the final whistle.

He thought the chance had gone. A huge three points for the Reds.#LFC 🔴 pic.twitter.com/bACBLWwbO1