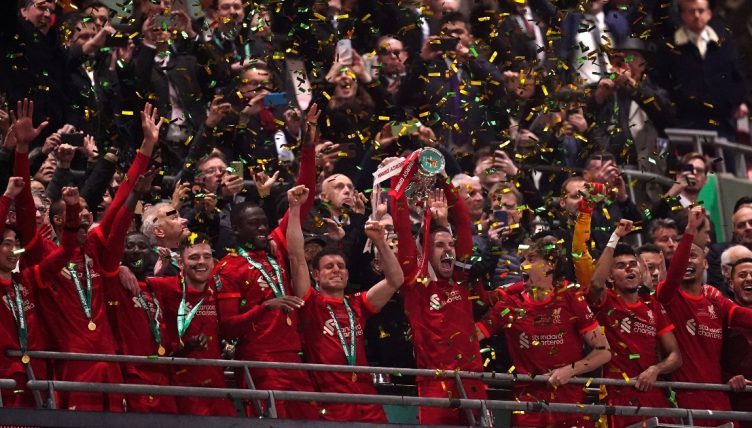 Chelsea’s Kepa Arrizabalaga undoubtedly provided the comedy moment of the League Cup final but Liverpool’s Ibrahima Konate gave him a run for his money in the post-match celebrations.

Arrizabalaga – who refused to be substituted off in the 2019 League Cup final defeat to Manchester City – was substituted on in the closing minutes by Thomas Tuchel, especially for the shootout.

But he failed to save a single one of Liverpool’s 11 penalties before stepping up to send his own penalty into orbit – an unfortunate moment that’s destined to be replayed for years to come.

Konate’s moment is less likely to be remembered in the annals of history, but he made us laugh all the same. The French centre-back came on to shore up the defence in extra time of the goalless match, and was right in the mix as Liverpool lifted the trophy.

As confetti reigned down at Wembley, the 22-year-old appeared to get a piece stuck in his mouth and gave an absolutely hilarious reaction as he pulled it away.

The defender has now won his piece of silverware with the Reds, while there remains the prospect of a further three more in his debut campaign.

He recently revealed how Jurgen Klopp convinced him to sign and definitely doesn’t seem to be regretting the decision.

“I said, ‘okay, if I was your son and your son was in my position, what would you tell him to do?'” Konate told the Sunday Times.

“Klopp said, ‘okay, this club is good and that club is good, but for sure I would tell him to go to Liverpool’. As he was saying this I watched nothing else but his eyes. To see if he was sincere.

“And I saw sincerity on his face. I said, ‘this decision will be good for me’. And after, when you think about the other players at Liverpool . . . which players don’t want to come here?”