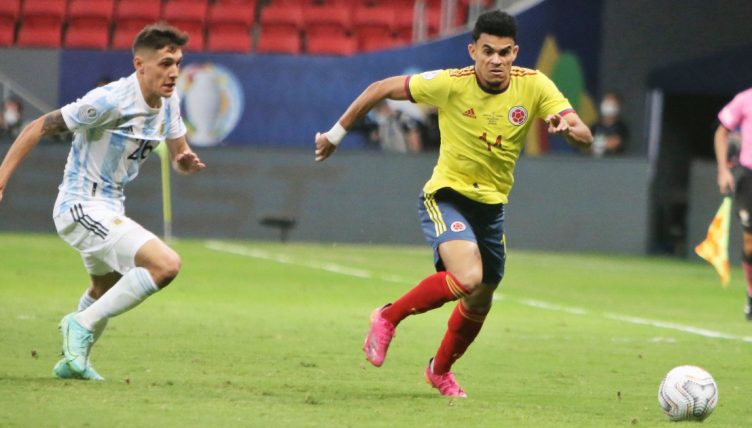 Luis Diaz gave Liverpool fans a glimpse of what they can expect from him during Colombia’s 2022 World Cup qualifier against Argentina.

Diaz looked set to sign for Tottenham during the January transfer window but joined Liverpool in a deal that could eventually be worth £50million.

The winger scored 16 goals in 28 appearances for Porto during the first half of 2021-22, including a stunning strike against Manchester City in the Champions League.

After completing his move to Liverpool, he linked up with the Colombia squad and started in their games against Peru and Argentina.

While Diaz wasn’t able to prevent his country from losing both of the World Cup qualifiers, he did produce a moment of brilliance against the reigning Copa America champions.

During the closing stages, the 25-year-old received the ball in Argentina’s half and then evaded the defender with a Johan Cruyff-esque turn.

Liverpool fans can’t wait to see Diaz in a red shirt and left-back Kostas Tsimikas is excited about the prospect of playing alongside him.

“Everybody is looking forward to seeing him with the Reds,” Tsimikas told Liverpool’s official website. “Obviously when we played against Porto, I think he was their best player.

“I’m looking forward to meeting him, speaking with him and to be here (for) whatever he wants. I’m pretty sure he will help us a lot.

“Obviously I didn’t mark him but I really like his skills. He really goes for one against one, he didn’t think too much. I like him a lot as a player.

“I like it when a player doesn’t think too much and goes direct to score himself and to try to do something for his team. Hopefully, I will see it here also. He’s an incredible player.”

Diaz 😍 I’m telling you this guy is something very special
pic.twitter.com/NSnYfEtmK7