Watch: Liverpool’s Mo Salah fumes at Jurgen Klopp after being subbed off 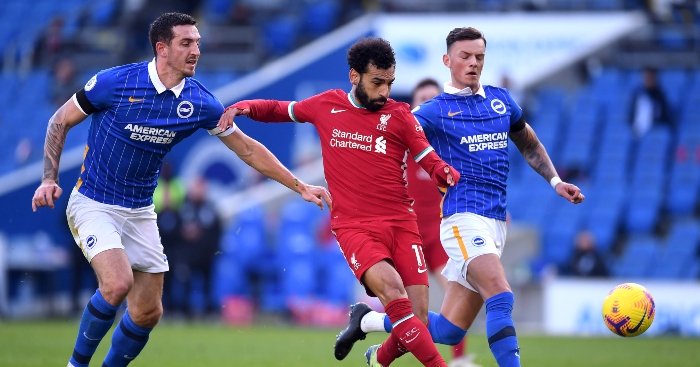 Mohamed Salah endured a really frustrating afternoon as Liverpool were held to a 1-1 draw against Brighton.

Salah thought he had scored the opening goal at the Amex, only for VAR to review the incident and subsequently rule it out for offside.

He did, however, play a decisive role in Diogo Jota’s opener, flicking Andy Robertson’s pass on for the Portugal international to score his ninth goal of the season.

The 28-year-old, who has just recovered from illness, was then replaced by Sadio Mane in the 64th minute and didn’t look happy about the decision.

After raising his arms and trudging from the pitch, he appeared to ignore Jurgen Klopp before joining the rest of the substitutes.

Mane also had a goal ruled out for offside and Pascal Gross’ controversial injury-time penalty rescued a draw for the home side.