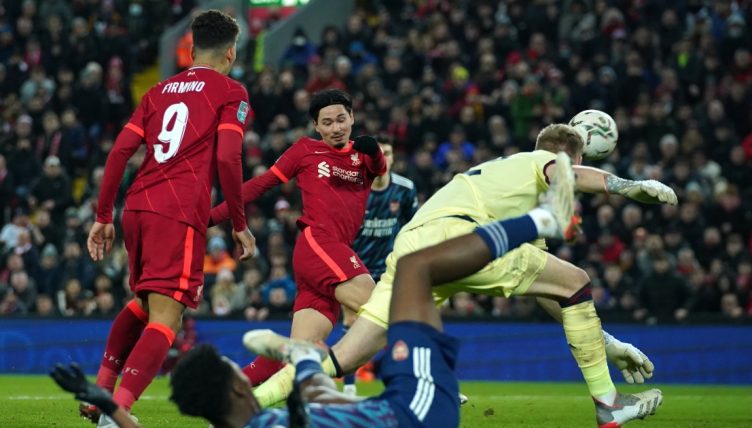 Takumi Minamino wasted a golden opportunity to help Liverpool win the first leg of their EFL Cup semi-final against Arsenal.

Minamino, who joined Liverpool from Red Bull Salzburg in January 2020, has failed to live up to expectations in his first two years at Anfield.

The Japan international has scored just two goals in 25 Premier League appearances for the Reds and spent the second half of last season on loan at Southampton.

But he has impressed in the EFL Cup this season, scoring a brace against Norwich City before also finding the net against Preston and Leicester.

With Sadio Mane and Mohamed Salah both at the Africa Cup of Nations, he started in a front three against Arsenal alongside Diogo Jota and Roberto Firmino.

Despite Granit Xhaka receiving an early red card for a challenge on Jota, Liverpool struggled to break down a very stubborn Arsenal defence.

They were presented with a great chance in the 89th minute as Aaron Ramsdale dropped the ball but Minamino blazed over the crossbar when faced with an open goal.

“Minamino panics – he needs to show some composure – but in a nutshell that summed up Liverpool tonight and it summed up Minamino’s Liverpool career,” Jamie Carragher told Sky Sports after the game.

The two sides will play the second-leg of their semi-final at the Emirates next week and the winners will then face Chelsea in the final.

Big fluff by Aaron Ramsdale but how did Takumi Minamino miss from there? 🤯🤯pic.twitter.com/wv4jj786Pj