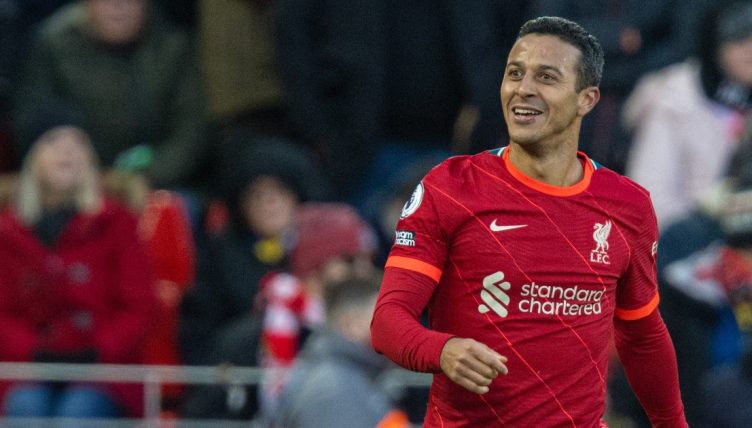 He’s renowned for his breathtaking technical ability and showed it in the first half with an audacious effort at goal.

The Spain international has been sidelined with a hip injury in recent weeks, but made a return against Cardiff City in the FA Cup last weekend.

After a cameo role last time out, Jurgen Klopp selected Thiago in his starting XI to face the Foxes in the Premier League.

Liverpool began the game brightly dominating proceedings. The 30-year-old looked like he hadn’t been away orchestrating from the middle of the pitch.

With 41 minutes played – just after Diogo Jota fired the Reds ahead – Thiago attempted what would have been a certain goal of the season contender.

The execution was lacking as the strike trickled wide of Kasper Schmeichel’s post, but he still received applause from the Anfield crowd for his intentions.

Thiago was unable to replicate the stunning acrobatic last-minute winner he scored for Bayern Munich against Stuttgart back in 2014.

But he is sure to try his luck again with the spectacular in the future.

Speaking to LFCTV after the game, Thiago explained his joy of being back to full fitness: “It’s the most amazing feeling in the week because you train and training for sure is important. But nothing compares in our life than when we step on this grass and we play the game.”

Where are they now? Klopp’s second string Liverpool FA Cup XI from 2016