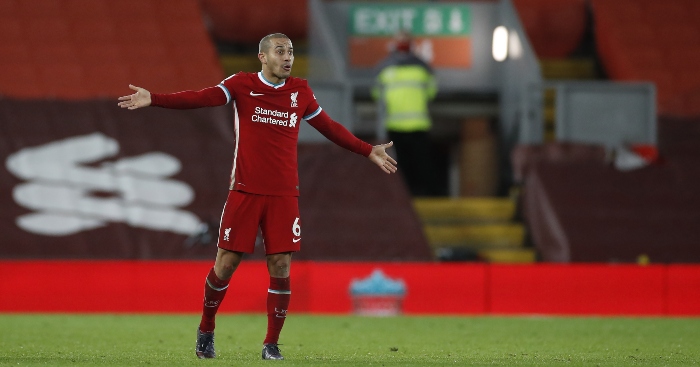 There was much excitement when Jurgen Klopp bought Thiago from European champions Bayern Munich for an initial £20million last summer.

But the Spain international has endured a stop-start season to date. After being sidelined by illness and then suffering a knee injury in the Merseyside derby, he made his Anfield debut in Sunday’s match.

In a tense and cagey encounter, the midfielder still found time to illustrate his immense quality.

During the first-half, which Liverpool had dominated but failed to land a glove on United, Thiago collected the ball deep inside the opposition half.

Dribbling around United talisman Bruno Fernandes as if he were a traffic cone, he travelled forward and lofted a pass over to Mo Salah.

The chance was wasted, but the return of Thiago is a timely boost to Liverpool’s hopes of retaining the Premier League title.