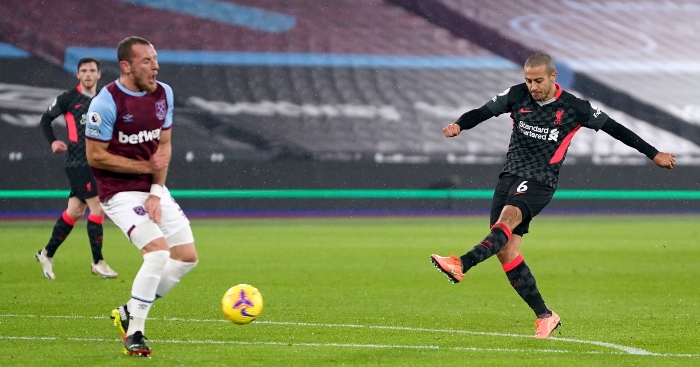 Having played an integral role in Bayern Munich’s treble success in 2019-20, Thiago arrived in England with a big reputation.

While the Spain international’s debut season at Liverpool has been marked by injuries, he has shown flashes of his immense quality.

At the London Stadium, playing against opponents who were in impressive form, Thiago supplied the first-half’s best opportunity.

With Liverpool building up the pressure, he collected the ball on the left flank and jinked past Jarrod Bowen. Taking a split second to look up, Thiago threaded a pass that dissected the West Ham defence and found Origi.

The striker’s effort slid narrowly wide but that took nothing away from the quality of Thiago’s pass.

A chance for Liverpool 🔴

On the stroke of half-time, Thiago threads through a stunning pass but Origi can't help it past Fabianski.