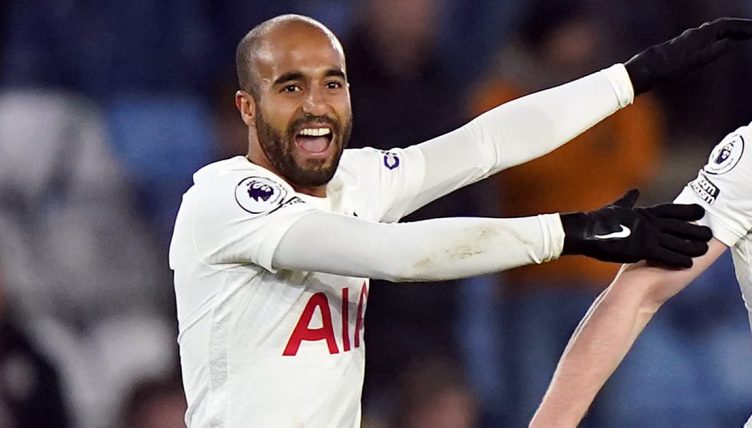 Tottenham players and fans were sent absolutely wild by Steven Bergwijn’s late winner in the Premier League game against Leicester on Wednesday night – and Lucas Moura even saw fit to steal a supporter’s bobble had in the midst of the limbs.

It was little wonder that Spurs players and fans went delirious after Bergwijn scored the winner at the King Power Stadium – it was just about the most dramatic denouement to a match imaginable.

After an early spell of Spurs pressure, Leicester had taken the lead against the run of play, Patson Daka converting from a tight angle.

But Tottenham came back to equalise through a brilliantly taken Harry Kane goal – just his fifth of the season in the Premier League.

James Maddison then gave Leicester the lead – again against the run of play – but Antonio Conte’s men kept battling until the very end and got their just rewards.

Steven Bergwijn was the hero, first pouncing on a loose ball to make it 2-2, before latching onto a Harry Kane pass just seconds after the restart to give the Lilywhite’s late glory.

There was utter pandemonium among the fans in the corner of the King Power, and the players were more than happy to join in.

For Lucas Moura, it seemed the excitement was all a bit too much. First, he ran over to join Bergwijn and grabbed the bobble hat from the head of a celebrating fan before throwing the apparently offensive bit of headwear on the ground.

Then the Brazilian mounted a steward like he was a horse, jumping up onto the fluorescent-jacket clad man mountain and cheering with the fans.

It was all quite weird, but in the circumstances, Lucas can be forgiven.

We just hope the fan’s head wasn’t too cold on the way back to north London.

Note to self: don't wear hats around @LucasMoura7 😂 pic.twitter.com/bJesw9QNEn

Scenes like last night are the reason we LOVE football. 🙌pic.twitter.com/XKRtCiT4Vb