Watch: Lucas scores first Liverpool goal for over half a decade 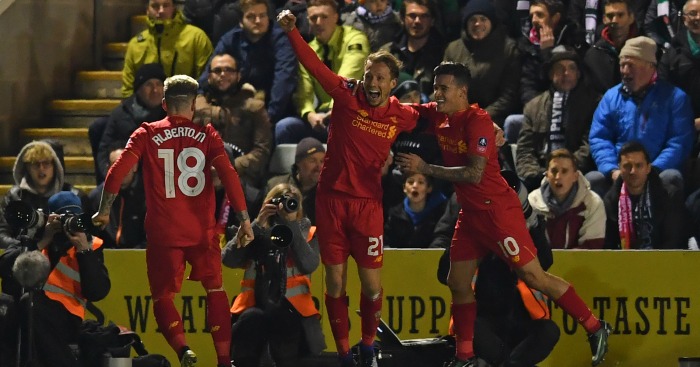 The magic of the FA Cup was in full effect at Home Park on Wednesday night when Plymouth Argyle hosted Premier League Liverpool.

Argyle may not have been able to pull off a historic giant killing, but something even more unlikely took place: Lucas Leiva scored his first goal for Liverpool since September 16, 2010. That’s almost six and a half years, or 76 months, or 2,316 days.

Unsurprisingly, the Brazilian stalwart looked delighted with his effort.

The last time Lucas notched for the Reds, Roy Hodgson was manager, and David Ngog and Joe Cole were also on the scoresheet in a 4-1 victory over Steaua Bucharest in the Europa League. Meanwhile, the first ever iPad had just been released and his current Liverpool team-mate Ben Woodburn was only 10 years old.

“It’s that long? I scored last week in training you know?” Lucas joked after being reminded of his goal drought.

Jurgen Klopp backed him up: “He is the top scorer in training! I love this in football, everyone can cause problems.”