Watch: Luis Suarez scores ‘the best goal of my career’ with outrageous backheel 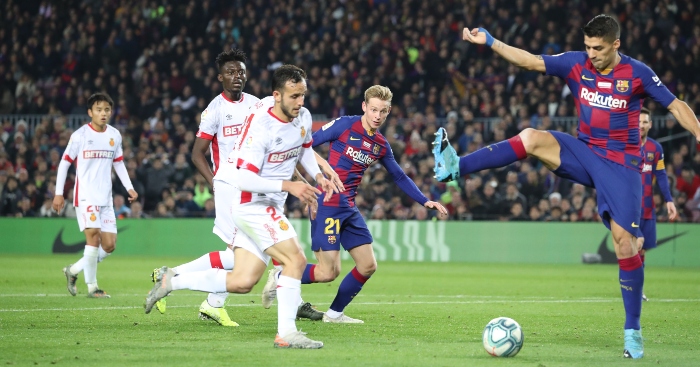 Luis Suarez described his backheel in Barcelona‘s 5-2 rout of Mallorca on Saturday evening as “the best goal of my career” – and we’re not going to disagree.

Barcelona ran out comfortable winners at the Camp Nou as Lionel Messi bagged a hat-trick and Antoine Griezmann also struck.

But Suarez’s effort just before half-time to make it 4-1 caught the eye most, and the Uruguay international was clearly delighted with his own work.

“It’s the best goal of my career,” Suarez said afterwards.

“I knew that it was a tight angle and the last option I had was to hit it with my heel. I was looking to bounce it because I had very little chance against the goalkeeper.

“[Head coach Ernesto] Valverde tells me that sometimes I miss the easiest ones and score the most difficult ones.”

🐐 It's 4-1 at HT as Leo Messi goal also got his second and Barca's third pic.twitter.com/gTxk2C6TmE