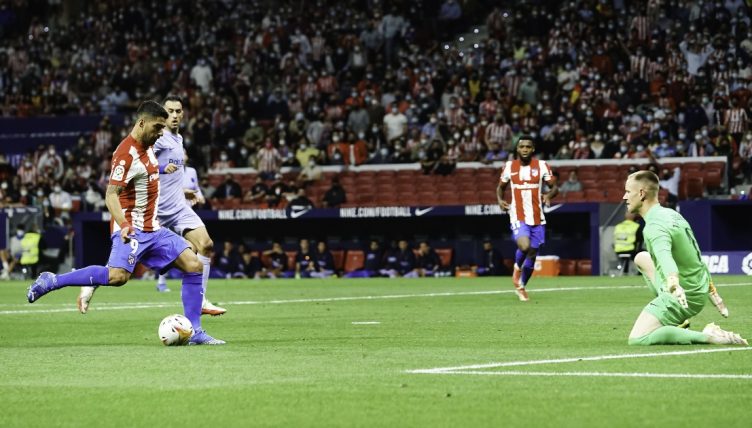 Luis Suarez did a muted celebration after piling the misery on his former club Barcelona, scoring Atletico Madrid‘s second goal in a routine 2-0 win at the Wanda Metropolitano.

However, the legendary Uruguayan goalscorer – who fired Atletico to their first league title since 2014 after being let go by Barcelona last year – wasn’t going to let slip an opportunity to rub salt into the wounds of under-fire coach Ronald Koeman.

Suarez evidently hasn’t forgiven Koeman for the way in which he was booted out of Barcelona, reportedly via a phone call. Having scored 198 goals and won four league titles during his six years with the club, the striker believes he was worthy of more respect from the Dutch coach.

He made reference to that phone call in the closing stages of the game, having originally done little to celebrate after combining well with Thomas Lemar – who he’d assisted for the opener – with a well-taken finish after an incisive counter-attack to make it 2-0 in the closing minutes of the first half.

In an unfortunate moment of serendipity, the camera then cut to Koeman – who was watching from the stands after being sent off against Cadiz last month – speaking on the phone, presumably communicating with his coaching staff.

The win takes the reigning La Liga champions back level on points with Real Madrid at the top of the table, while Barcelona sit down in 9th, having won just three of their seven league outings so far. Koeman is reportedly close to being sacked, but club president Joan Laporta insisted he’d be given more time regardless of yesterday’s result.

Luis Suarez has his goal against his former team! 🔥

With that strike against Barcelona, Suarez has now scored against all 31 LaLiga teams he's faced in his career 🙌 pic.twitter.com/RHsBkqOCyT