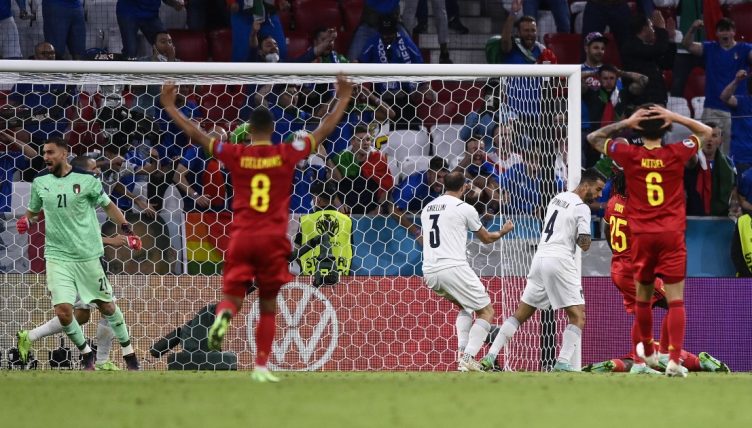 Romelu Lukaku looked for all the world to equalise for Belgium in their rip-roaring Euro 2020 quarter-final clash with Italy, but he was denied by a brilliant block.

The two sides played out a wonderfully high-tempo contest in Munich, in which Italy took a two-goal lead in the first half. But Lukaku got Belgium back into the contest after slotting home from the penalty spot on the stroke of half-time.

The Inter Milan striker scored his 64th international goal and looked certain to get his 65th on the hour mark. On first viewing, it looked as though he might have missed a sitter, striking the post from short range after Kevin De Bruyne laid it on a plate for him.

But replays showed that in fact Italy defender Leonardo Spinazzola got his body across and blocked Lukaku’s goal-bound effort.

Later in the half, Spinazzola broke down in tears as he was stretchered off after appearing to suffer a serious muscle injury. The rest of his tournament is in severe doubt, but he can take some solace in his brilliant intervention proving pivotal in Italy’s place in the semi-final after they saw out the 2-1 win.

The Roma full-back will surely remain a strong contender for the team of the tournament, even if he doesn’t play another minute.

Chelsea fans, look away: Lukaku & De Bruyne are the scariest duo on Earth