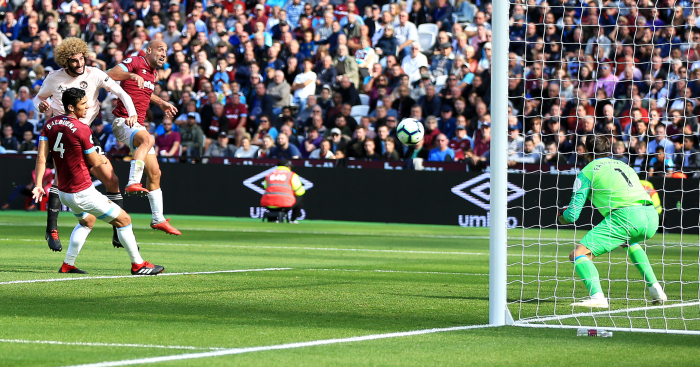 West Ham may have shown some impressive attacking play in their victory over Manchester United – but they had Lukasz Fabianski to thank for a crucial stop from Marouane Fellaini in the second half.

The Hammers piled on the pressure on Jose Mourinho with a 3-1 victory at the London Stadium thanks to goals from Felipe Anderson and Marko Arnautovic, plus an own goal from Victor Lindelof.

Manuel Pellegrini’s men led 2-0 at half-time, but United almost pulled one back on the hour mark as Fellaini had an excellent chance to score from Ashley Young’s cross.

Fabianski somehow got down low to his right to keep the ball out just before it crossed the line, and the save proved crucial as Marcus Rashford did pull a goal back 10 minutes later.

Arnautovic ultimately rounded off the scoring, but things could have been very different were it not for this wonderful stop from Fabianski, featuring some excellently excitable commentary.