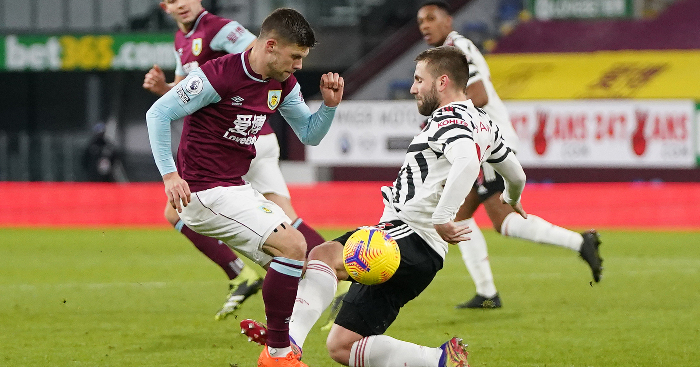 Both Manchester United and Burnley feared being reduced to ten men after a lengthy VAR delay, but both sides were able to breathe a sigh of relief midway through the first half.

Edinson Cavani was sent through on goal but taken down by Robbie Brady. The Republic Of Ireland international was originally shown a yellow card, but replays showed there was a good case for it being the last man and a red.

But Brady’s blushes were spared after a twist, in which VAR looked at how United won possession earlier in the move, with a reasonable question of whether Luke Shaw’s challenge on Johann Berg Gudmundsson was dangerous enough to warrant him being dismissed.

After a lengthy delay, multiple replays and plenty of debate in the Sky Sports commentary box, referee Kevin Friend went to look at the monitor for both incidents. He rescinded Brady’s booking, taking the move back to Shaw’s earlier infringement, but the left-back escaped with a yellow.

It could have been a red card for either side – a big decision for the referee!

After a lengthy review, the hosts are awarded a free-kick and Luke Shaw is yellow carded…