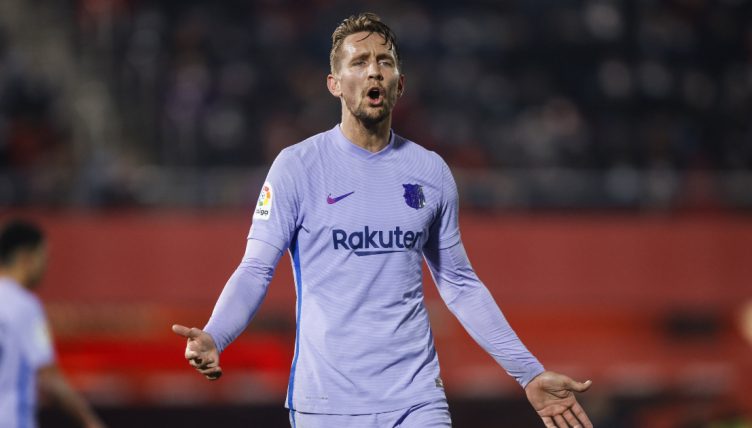 It has been a rocky time for Luuk de Jong at Barcelona, but his 2022 nearly got off to the perfect start when he came close to scoring a stunning bicycle kick against Mallorca in La Liga.

Barcelona had to field a patchwork side of youngsters and squad players due to the absence of 16 players as a result of Covid-19, suspension and injury.

Sergio Busquets, Memphis Depay, and Martin Braithwaite were all among those unavailable.

It was De Jong who stepped up on this occasion, scoring the only goal of the game in the 44th minute to give Barcelona a vital 1-0 win in the race for the top four.

But prior to his opener he almost scored what surely would have been the goal of the season.

When a cross looked to be going slightly behind in the Mallorca box, he turned his back to goal and lept to meet the ball with his right foot.

It fired off his foot and looked destined to go in, only for the ball to hit the crossbar and rebound out.

It was a stunning effort from De Jong, who has only been a bit-part player for the Blaugrana since he arrived on loan in the summer from Sevilla.

Having been signed by Ronald Koeman, the striker’s opportunities shrunk when his manager was sacked and replaced by Xavi who made it clear he wanted to prioritise the club’s own youth players.

But his performance against Mallorca may open up the possibility for De Jong to stay at the club past January, despite rumours about him leaving early.

😱 @LuukdeJong9 almost scored the GOAL OF THE SEASON before his opener…