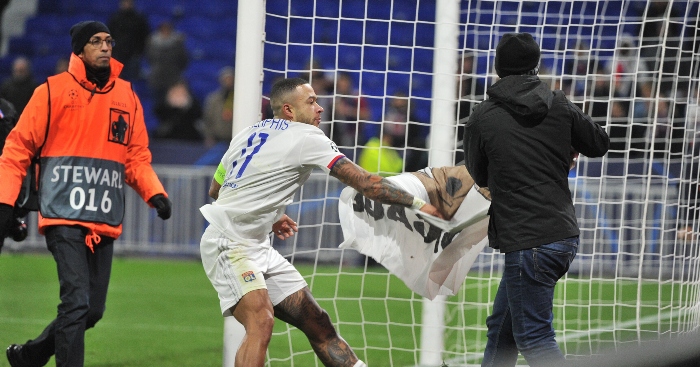 Lyon’s qualification for the Champions League knockout stages was marred by ugly scenes as players clashed with their own supporters following the 2-2 draw with RB Leipzig.

First-half penalties from Emile Forsberg and Timo Werner left Lyon trailing 2-0 at half-time, but they rallied to secure a 2-2 draw thanks to strikes from Houssem Aouar and former Manchester United forward Memphis Depay.

At the final whistle, Depay then clashed with one fan who was brandishing a banner comparing defender Marcelo to a donkey, alongside the message: “Marcelo leave the club.” This then escalated as more fans and players became involved.

Marcelo became a target of Lyon’s Ultras after a high profile mistake against Benfica earlier in the season, which led to fans confronting him at Lisbon airport.

Lyon Captain Memphis Depay went after a supporter after the fan walked onto the pitch, holding a donkey banner with the writing "Marcelo leave the club" pic.twitter.com/Ck4zAGnNiC

A forensic analysis of Memphis Depay’s freestyle rap on Instagram