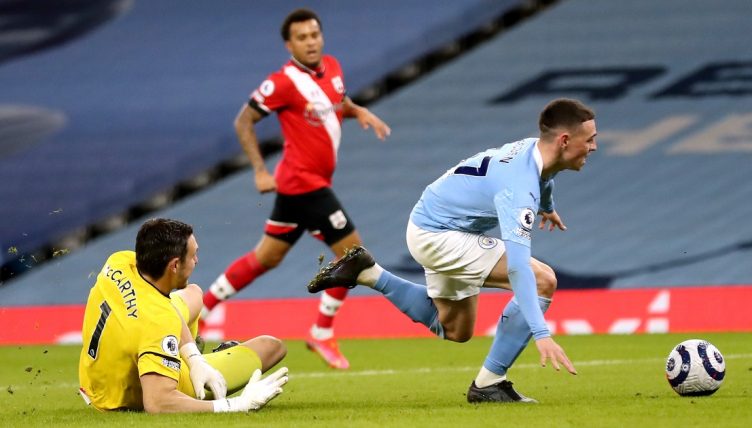 Manchester City certainly didn’t need help from the match officials when it came to scoring goals against Southampton, but they can ask a legitimate question as to whether they should have had a penalty.

Shortly after Southampton had been awarded a penalty, with James Ward-Prowse converting to cancel out Kevin De Bruyne’s early opener, Phil Foden had a big claim in the penalty box.

Just after the half-hour mark, while the scores were still tied at 1-1, Saints goalkeeper Alex McCarthy miscontrolled the ball and allowed it roll into the path of Foden.

The 20-year-old was on his toes and appeared to get there ahead of McCarthy, knocking it past him to set up a perfect goalscoring opportunity and seemed to be knocked off his stride by the keeper’s late challenge.

But rather than fall to the floor, claiming for a penalty that surely would have been given, Foden kept scrambling towards the ball, but the chance had gone by the time he managed to get to it.

The honesty is certainly admirable, especially as City went on to add a raft more goals, but you imagine Pep Guardiola might have viewed this differently had he done this with the scores tied in the final minute.

All you need to know about Manuel Locatelli, linked with City, Juve, Madrid