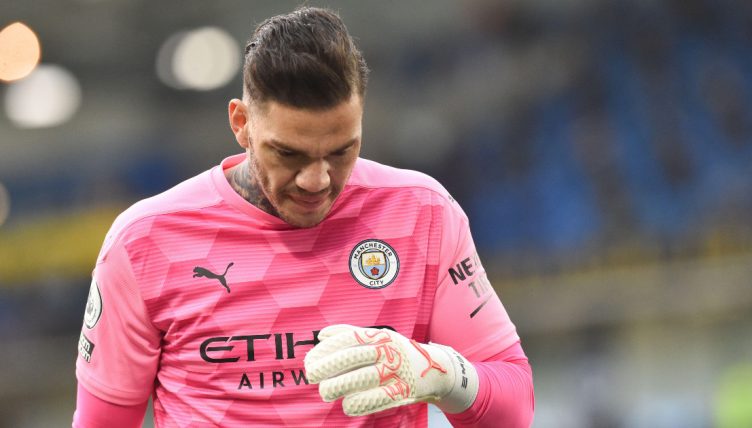 Since his arrival in the summer of 2017, Ederson has established himself as one of the Premier League’s best goalkeepers, but his tendency to spend a lot of time on the ball nearly backfired massively in Manchester City’s mammoth clash against Liverpool.

During the first half at the Etihad, he received the ball in front of his goal but a suspect first touch sent the ball goalwards and after kicking the ground by mistake, the goalkeeper managed to recover just in time to stop the ball from going in.

It was a moment that stopped the hearts of the City fans inside the Etihad, but they would end the first half with a 2-1 lead after a dominant performance.

The highly anticipated match saw Liverpool make the short journey to Manchester just one point off City, with an upcoming FA Cup semi-final between the two sides crucial in determining who could potentially win a treble, or quadruple in Liverpool’s case.

Ederson has made 230 appearances since joining from Benfica for around £36million and is perfectly suited to Pep Guardiola’s style of football.

“We cannot have a better goalkeeper than Eddie,” Guardiola told Manchester City’s website in May 2021.

“He suits perfectly our way [of playing]. The impact he has on the team is massive.

“His composure and the way he faces the good moments and bad moments is remarkable.

“He has incredible work ethic. He has the best goalkeeper trainer in the world in Xabier Mancisidor. He is the best one.

“He and Richard [Wright] have done an incredible job – not just with Eddie, but with Zack [Steffen], Scott [Carson] and the young guys we have.

Ederson arguably should have done better for Diogo Jota’s reply to Kevin De Bruyne’s opener, but his ability to distribute the ball like a midfielder makes him one of the most important players in a Manchester City side stacked full of talent.

Watch the game live on 👇🏻https://t.co/yqf8KeiSGP