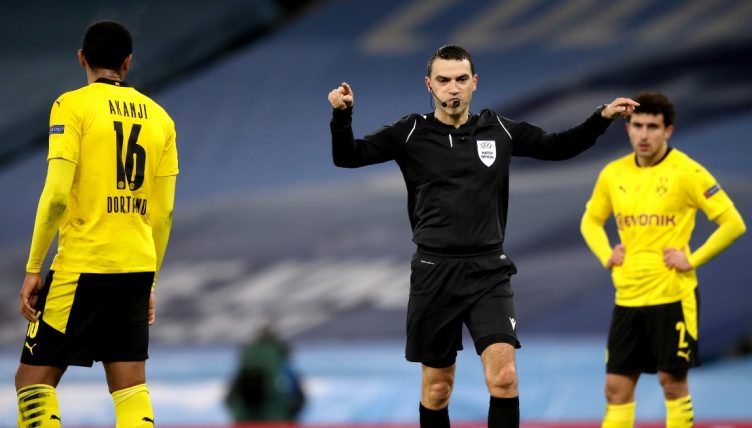 Borussia Dortmund can reasonably feel aggrieved that they didn’t get a crucial away goal in the first half of their Champions League quarter-final against Manchester City.

City went ahead earlier on through a simple finish from Kevin De Bruyne, and they thought they’d had a chance to double their lead when referee Ovidiu Hategan pointed to the spot.

But after reviewing on the pitchside monitor, he realised the initial decision to penalise Emre Can for a perceived high boot on Rodri was extremely harsh and reversed the decision.

There was more controversy a little while later, and no means to go back on an a debatable call (to say the least) when he whistled for a foul from Jude Bellingham on Ederson.

England international Bellingham had nicked the ball from the City goalkeeper and replays showed that he didn’t do anything wrong. Because the whistle had been blown, VAR could do nothing.

Dortmund forward Jadon Sancho, sidelined and unable to play his former side, was evidently not pleased watching from home.

Jude Bellingham has the ball in the back of the net vs. Man City… but the referee says no!

The teenager robbed Ederson of the ball, but play was pulled back for a foul. @jjenas8 thinks the hosts got away with one there… 😬 pic.twitter.com/hYLhvQojxX