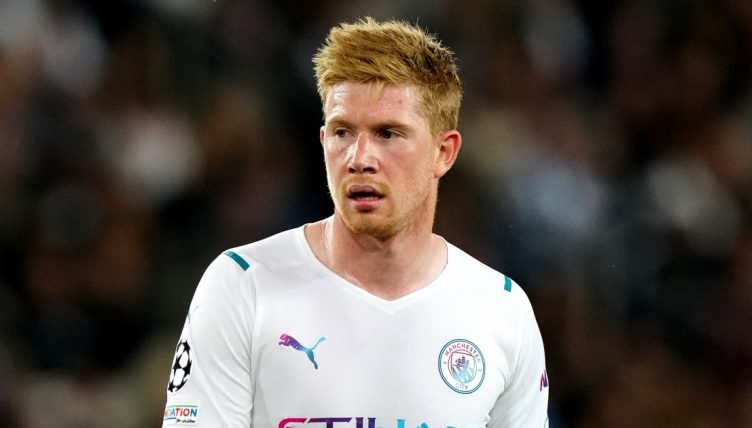 Kevin De Bruyne might consider himself a bit fortunate after avoiding a red card during Manchester City‘s 2-0 defeat to PSG.

De Bruyne overstretched trying to challenge for the ball and fouled Idrissa Gueye, who had given PSG an early lead at the Parc des Princes.

The Belgium international did initially get a toe to the ball but his follow through was incredibly dangerous and left Gueye in agony. Despite a lengthy stoppage and a VAR check, he only received a yellow card and was able to stay on the pitch.

A fortnight ago, Manchester United’s Aaron Wan-Bissaka was shown a straight red card for a similar challenge on Young Boys’ Christopher Martins. United fans on Twitter reacted in the manner you might expect.

Aaron Wan-Bissaka was sent off for the exact same challenge that Kevin de Bruyne just done on Gueye. The referee has only given KdB a yellow card, what an absolute joke. pic.twitter.com/X784hupj2f

Aaron Wan-Bissaka gets a red card.

Ngl that De Bruyne's challenge was worse than the Wan Bissaka challenge that got him sent off. Guess it's double standards😬

Wan Bissaka got sent off for something just like the De Bruyne tackle.

There’s the context of De Bruyne getting a toe to the ball but it’s irrelevant when he catches Gueye that high. A bad challenge that should’ve been a red card, particularly given Wan-Bissaka’s dismissal two weeks ago.

Worse challenge than Wan-Bissaka’s for sure. De Bruyne fortunate.