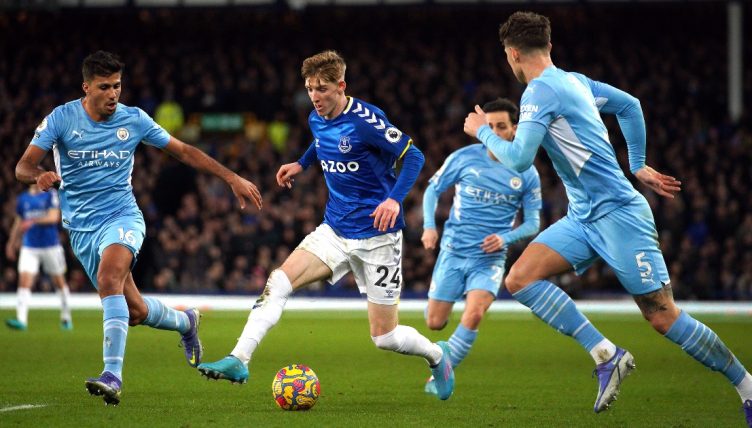 The whole of Merseyside – Liverpool and Everton fans alike – was left incensed after Manchester City controversially escaped without conceding a penalty in their 1-0 win at Goodison Park.

Frank Lampard’s side produced a decent performance against the league leaders, but failed to take their chances, while an under-par City ground out a result after Phil Foden scored an 82nd-minute match-winner.

But Everton felt aggrieved not to be a handed a golden opportunity to equalise a short while later after the ball struck Rodri’s arm in the City penalty area.

The Spain midfielder unintentionally brushed the ball with his arm as he clumsily tried to bring it under control. Paul Tierney waved away for the Everton appeals, but the match was subsequently halted while VAR took a good, long look at the incident.

After much deliberation, the video assistant referees told Tierney not to give the spot-kick.

The result means that City have bounced back from their 3-2 defeat to Tottenham last week, regaining their six-point lead over second-placed Liverpool. Jurgen Klopp’s side face Chelsea in the Carabao Cup final tomorrow and have a game in hand.

Everton were denied a penalty after Rodri was deemed to have not deliberately handled the ball ❌ pic.twitter.com/XqpQ2uiRTb