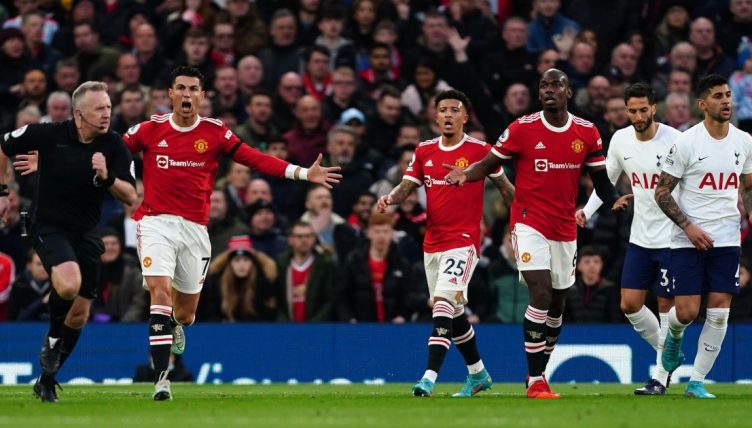 Manchester United were denied a penalty after what looked like a clear handball from Tottenham Hotspur’s Eric Dier wasn’t given during their Premier League clash.

United won the game 3-2, with Cristiano Ronaldo scoring a hat-trick, but there was early controversy when a goalward shot was blocked by the arms of Dier in the Spurs penalty box.

With the game in its early stages, an impressive breakaway from Manchester United resulted in a chance for Ronaldo to shoot.

But his shot towards goal was stopped in its tracks by the arms of Dier, which were bent behind his back.

The referee Jonathan Moss had no interest in the incident, however, and VAR agreed with the on-field decision.

Dier’s hands were adjudged to have been in a natural position while his proximity to Ronaldo also meant that he was unable to move his hands away from the ball.

Moss waved off the appeals of Manchester United players, but Ronaldo continued to remonstrate for several minutes after the incident.

He shook his hands and shouted out in frustration that the decision did not go his way.

While United took the lead soon after through a screamer from Ronaldo, there was more handball frustration for the Red Devils when they conceded a penalty themselves for a handball.

A cross from Dejan Kulusevski hit the outstretched arms of Alex Telles and a penalty was rightly awarded for the North London side in the 33rd minute.

United went on to win 3-2, with Ronaldo completing a hat-trick and securing victory for his side despite an own goal from Harry Maguire which had leveled the match at 2-2.

Ronaldo’s treble meant that he became the highest ever goalscorer in men’s senior football with 807 career goals.