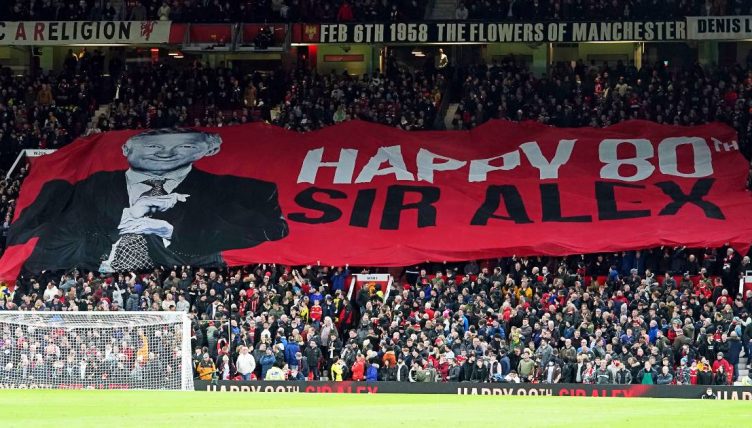 Sir Alex Ferguson was, is and always will be an absolute legend of British football, and he is especially revered by Manchester United fans, who unveiled a banner wishing him a happy 80th birthday at Old Trafford on Tuesday night.

Ferguson arrived at Manchester United from Aberdeen in 1986 having led the Scottish club to various titles.

It famously took Ferguson a while to settle, but his first United trophy came in 1990 with the FA Cup and that opened the floodgates for the most glorious era in United’s glorious history.

By the time Ferguson retired in 2013, he had won 13 Premier League titles, as well as nine domestic cups, two Champions Leagues and a European Cup Winners’ Cup, among a slew of other super cups and the like.

Ferguson was famous for his ruthlessness with his players, his teams’ quick, attacking football and most of all for his ability to consistently rejuvenate and reinvent his sides, creating a new winning team out of the ashes of every old winning team.

United fans will never forget the debt of gratitude they owe him and nor should they. For many, he would have been the only United manager they ever knew before he finally decided to pack it in.

Since then, he has been a regular presence at Old Trafford and is still an imposing figure and is known to wield his influence.

He was at Old Trafford again on Thursday night, the day before his 80th birthday, as United took on Burnley in the Premier League.

To pay tribute to their former manager, United fans unveiled a massive banner that they carried above their heads.

The man it was intended for looked delighted, clapping and talking to his wife Cathy as the banner fluttered behind the goal.

Ahead of his 80th birthday tomorrow, Man Utd fans display a banner in honour of their former manager 👏#PLonPrime is LIVE in the UK on Prime Video: https://t.co/i14Y4Ee229 pic.twitter.com/ogJoSC6tqq