Watch: Man Utd fans march on training ground in protest against the Glazers 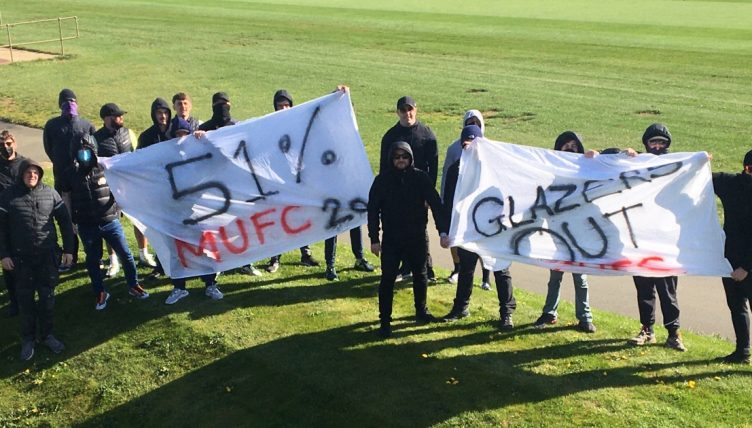 They may have pulled out of the European Super League, but Manchester United fans are not about to let the Glazers off the hook so easily.

When the 12 founding teams of what was supposed to be a new seasonal tournament were announced, United co-chairman Joel Glazer was one of the figures involved to include a statement singing the praises of the closed-shop league.

After huge anger from fans across Europe at the proposals, all six English clubs pulled out, with the Glazers issuing an apology to the club’s supporters for the “unrest” caused by the plans.

But after more than 15 years of ownership and dodgy acts, this latest one seems to have been a tipping point for the Old Trafford faithful.

On Thursday morning, reports emerged that a group of around 20 fans had marched on Carrington, the club’s training ground, making their way onto the practice pitches and blocking the entrance to the main building. United later confirmed this in a statement.

They brandished banners reading ‘Glazers Out,’ ‘We decide when you play,’ and ‘51%’ in reference to the German ownership model where fans must own over half of their club’s shares.

Only after being talked to by Ole Gunnar Solskjaer, Darren Fletcher, Michael Carrick and Nemanja Matic did the group finally disperse, but you get the feeling that this is only the start of the protests in the red half of Manchester.