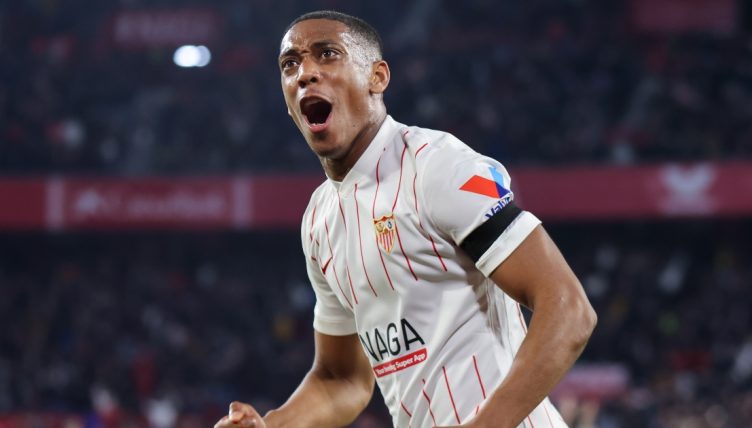 Anthony Martial opened his account for Sevilla with his first goal since joining on a six-month loan deal from Manchester United.

Martial, who joined United in 2015, fell out of favour at Old Trafford and started just four games for the club in the first half of 2021-22.

After a public disagreement with interim manager Ralf Rangnick, he was allowed to join Sevilla on loan for the remainder of the season.

Martial had an underwhelming debut against Osasuna but set up Rafa Mir’s goal against Elche on his second La Liga appearance.

“In these two weeks he’s been here, what I see is happiness,” Sevilla sporting director Monchi told the Times earlier this week. “When a player has the technical, tactical, physical qualities, what you have to do is touch the perfect spot for these qualities to reappear.

“And we think we’re capable of finding this spot. Possibly it could mean more affection, more support, more trust; speaking more to him, for his family to feel settled, for him to feel important.

“There’s not one model for every player – everyone has their needs.”

He played upfront during Sevilla’s Europa League last-32 first leg against Croatian side Dinamo Zagreb and looked very happy in the first half.

The France international won a penalty that Ivan Rakitic converted and then watched on as Lucas Ocampos gave Sevilla a 2-1 lead.

During first-half injury time, Martial cooly passed the ball into the back of the net from the right side of the penalty box. It’s his first goal a brilliant strike against Everton in October 2021.

With a new permanent manager planned to arrive at United at the end of the season, Martial could still have a future at Old Trafford if he continues to score in Spain.

Anthony Martial opens his account in Andalusia with a calm finish against Dinamo! 💥#UEL pic.twitter.com/VANdc4mxdx