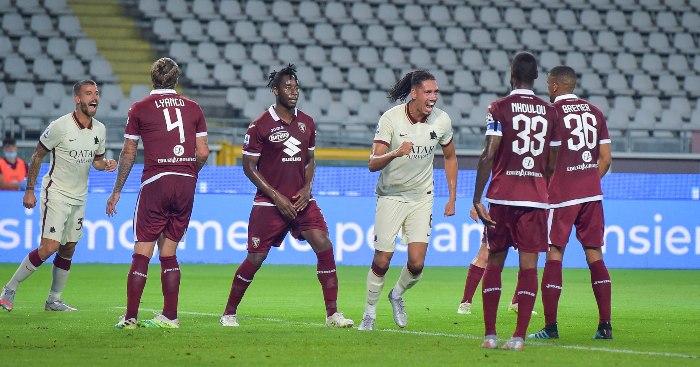 Manchester United loanee Chris Smalling was back among the goals for Roma with a thumping header in their 3-2 victory at Torino in Serie A on Wednesday night.

Smalling has shone since joining Roma on loan for the 2019-20 campaign, with reports suggesting the Italian outfit are keen to make his move permanent at the end of the season, although there have been suggestions they may struggle to meet United’s asking price amid potential competition from Inter and Napoli.

Roma are now guaranteed to finish fifth in Serie A after they came from behind to beat Torino, who took the lead through Alex Remiro.

Edin Dzeko equalised with the 350th goal of his career before Smalling headed the visitors in front. Amadou Diawara added a penalty, with Wilfried Singo pulling a goal back for Torino.

Smalling’s header was his third of the season – only twice has he bagged more in a single campaign.

Chris Smalling powers a header home from the corner 💥

Just under 10 minutes after going behind, Roma lead 2-1! 🐺 pic.twitter.com/HDER4Jkt5A