Watch: Man Utd’s Paul Pogba does brilliant skill whilst sat on the floor 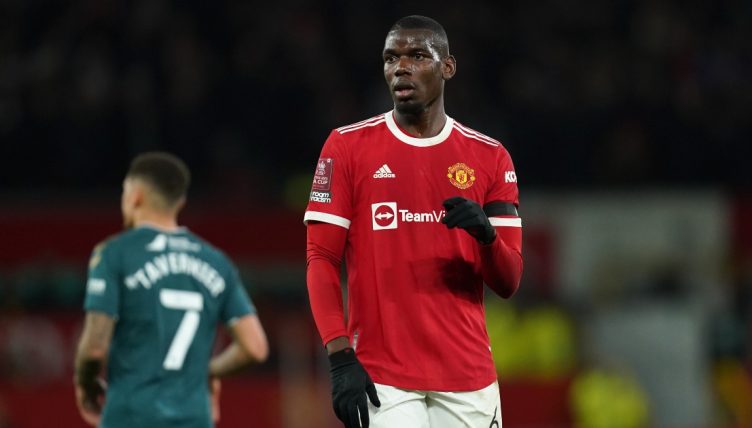 Paul Pogba produced a timely reminder of his abilities during Manchester United’s FA Cup tie against Middlesbrough at Old Trafford.

Pogba enjoyed a brilliant start to the 2021-22, registering seven assists in their opening four Premier League games of the campaign.

But he failed to register a direct goal contribution in his next five league games and then suffered a thigh injury in France training in November 2021.

The midfielder also looks set to leave Old Trafford when his contract expires at the end of the season and has been linked with Juventus and PSG.

“How many times do you have to say about Pogba, an outstanding talent no doubt about it he’s got the CV and the trophies to back it up,” Roy Keane told ITV Sport before the FA Cup game. “But in his time at United, I don’t think he’s been consistent enough.

“A big few months ahead for him from a selfish point of view for him if he’s looking at moving. Or could he possibly be staying at Man United?

“We don’t know with the manager but he’s a talented boy but hasn’t done enough at Man United, he hasn’t been consistent enough.”

Pogba started the FA Cup tie against Middlesbrough and was making his first appearance under interim manager Ralf Rangnick.

While United ultimately lost on penalties, the France international impressed during his 82 minutes on the pitch and produced one moment of magic.

In the first half, he tried to play a one-two with Marcus Rashford and looked to have lost possession when he fell to the floor. But the 28-year-old somehow found a way to pass the ball back to Rashford, who nutmegged a defender and then drove forward.