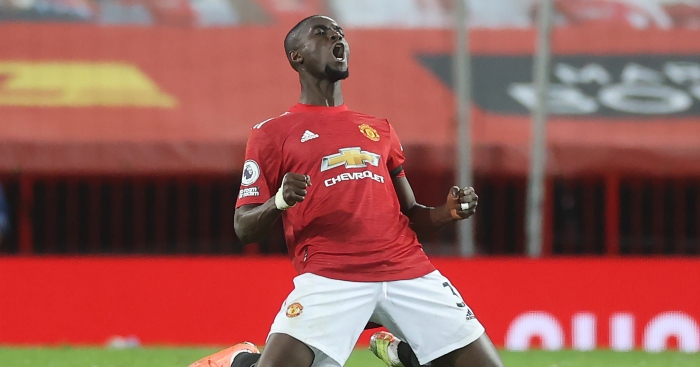 Eric Bailly was mobbed by his team-mates at full time after helping Manchester United secure a 2-1 win over Aston Villa.

United were leading thanks to goals from Anthony Martial and Bruno Fernandes but they were hanging on in stoppage time.

Keinan Davis looked set to equalise in the 95th minute before Bailly produced an incredible goal-saving block and United held on for the three points.

After the referee blew the full-time whistle, United players ran over to embrace Bailly in a great show of team spirit and togetherness.

“You can see today his physicality, his pace and his bravery is second to none really,” Ole Gunnar Solskjaer said after the game. “He’s got a style of play that’s caused him to get injured a few times and probably muscle fibres have caused some injuries as well.

“You can see how much it means to him but also for the rest of the boys at the end of the game. Because he is such a well-liked player and man in the dressing room.

“Everyone wants him to do well and knows the struggles he’s had and we’re delighted for him.”

Manchester United players all over Eric Bailly at full-time 🤣 pic.twitter.com/Rpebu03IuJ