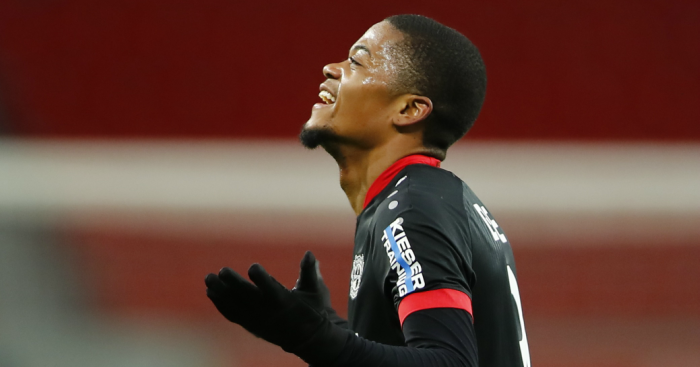 Bailey has been outstanding form in the Europa League this season, scoring five goals and providing two assists as the German side topped their group.

Now, the Jamaica international has translated that form to the Bundesliga.

During the match against Hoffenheim, Bailey tapped a short corner to team-mate Nadiem Amiri, who laid it back to him.

Most players would whip a cross into the box, but not Bailey. He immediately unleashed a left-footed shot that curled irresistibly into the top corner, leaving Hoffenheim goalkeeper Oliver Baumann helpless.

The 23-year-old then doubled their lead with his second goal of the game after pouncing on a poor back pass from Andrej Kramaric.

With the likes of Arsenal, Everton and Tottenham reported to be watching Bailey alongside United, Leverkusen will face a challenge on their hands to keep hold of their winger if he keeps producing moments like this.

What a magnificent strike to put Bayer Leverkusen in the lead 🚀 pic.twitter.com/Ms6r0w2ZHC

It just gets worse for Hoffenheim 😳

Leon Bailey capitalises on a terrible back-pass from Andrej Kramaric to score his second of the match 🙌 pic.twitter.com/4bgTqhiKvp