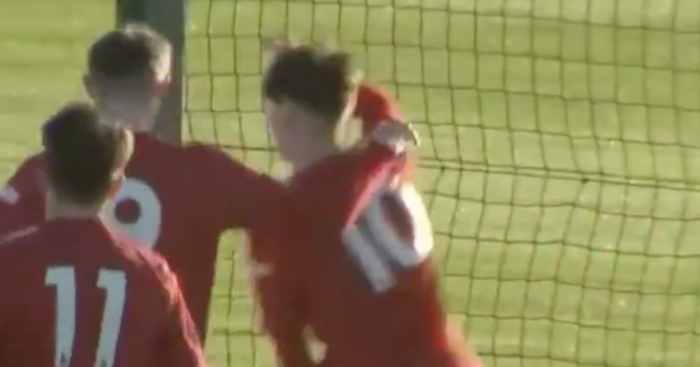 Manchester United youngster Charlie McNeill scored a Panenka penalty in an Under-18 game against Leeds before taunting his opponents with a ‘Take the L’ celebration.

McNeill left United as a schoolboy but returned to the club from Manchester City earlier this year for a fee of £750,000, that could rise to £1.5million in the future.

The 17-year-old striker has impressed the coaches at Old Trafford with some eye-catching displays in training, and he translated this form into the match with fierce rivals Leeds.

Faced with taking a penalty to open the scoring, McNeill decided to chip his effort right down the middle and out of reach of the despairing goalkeeper.

As if this piss-taking wasn’t enough, McNeill taunted Leeds with a ‘Take the L’ celebration from the game Fortnite and popularised by Antoine Greizmann.

Charlie McNeill giving it to Leeds with the 'Take the L' celebration 😂 pic.twitter.com/qQjLOvNuIA