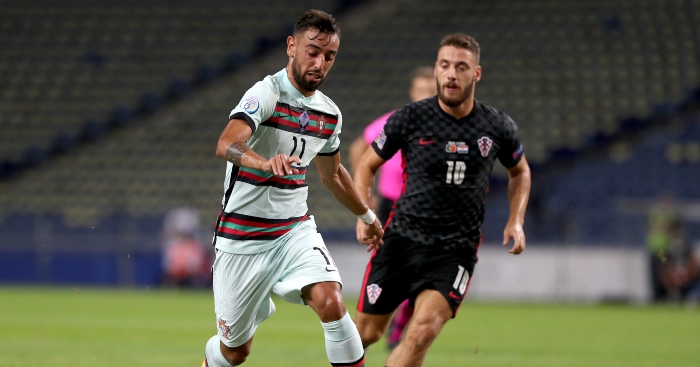 Manchester United‘s Bruno Fernandes has picked up where he left off last season with a brilliant performance in Portugal’s 4-1 win over Croatia.

Fernandes joined United from Sporting Lisbon in January and made an immediate impact, registering 12 goals and eight assists in his first 22 appearances.

The 25-year-old returned to action on Saturday, helping his country make a successful start to their UEFA Nations League campaign.

He provided the assist for Joao Cancelo’s opener before second-half goals from Diogo Jota, Joao Felix and Andre Silva completed a comfortable win for Fernando Santos’ side.

Fernandes also came up against Chelsea midfielder Mateo Kovacic and showed great footwork to put the ball through his opponents legs.

"Kovacic will start in every pl team"
Man can't even close his leg ffs. pic.twitter.com/7X1UihSL70

Sergio Reguilon next? The nine players Man Utd have signed from La Liga