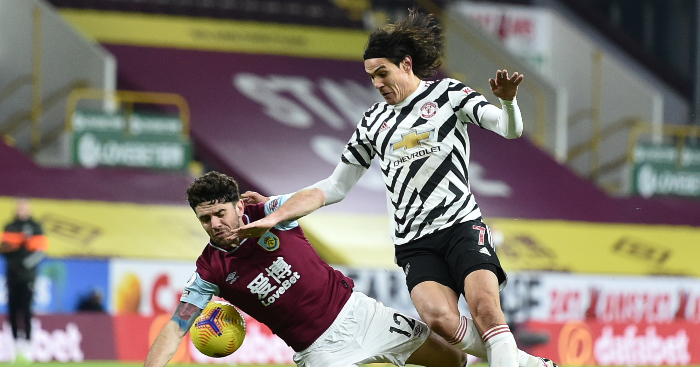 Edinson Cavani wasn’t able to mark his Manchester United return with a goal, but he did produce one sensational moment to savour.

After serving a three-match ban for using an offensive term on social media, the Uruguay international was back in United’s starting line-up against Burnley.

The first-half was full of controversy, with a Harry Maguire header controversially ruled out and a lengthy VAR delay involving potential red cards at both ends of the pitch.

After being picked out by Bruno Fernandes, Cavani was bearing down on goal the first half when Robbie Brady took him down in a challenge just outside the box.

The referee reviewed the incident on the VAR monitor but disregarded Brady’s foul entirely and instead penalised Luke Shaw for an earlier challenge.

Given everything else going on, it was easy to miss the wonderfully deft touch from Cavani that put the ball through Brady’s legs, forcing the Burnley man to commit the last-man challenge.

We’re making up for that now by watching it 20 times in a row.

Watch: Dimitar Berbatov sings a Man Utd song after they go top of the league