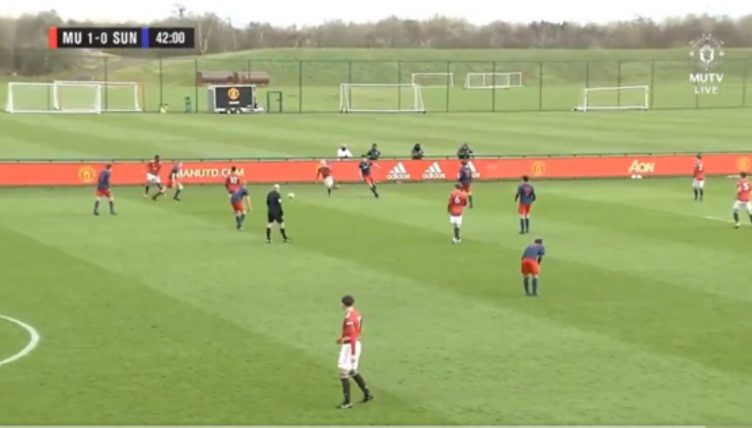 Isak Hansen-Aaroen showed why he’s so highly rated with some brilliant skill during Manchester United Under-18s 6-0 win over Sunderland Under-18s.

Hansen-Aaroen made his first-team debut for boyhood club Trosmo aged 15 years and 319 days, becoming the youngest player to ever appear for the Norwegian side.

Despite having trials at Liverpool and Everton, the midfielder signed for United on his 16th birthday in 2020.

“They’ve been following him since he was 13, they saw him at a local football school here and he was the best player. He was given a trip to Manchester and he actually played at Old Trafford, a small training game there for children,”  Hansen-Aaroen’s technical coach Jonas Johansen told the Manchester Evening News in 2020.

“They’ve followed him closely ever since. When he was 14 he had his first trial there. They’ve been close with him, his agent and family since then. He completed the pre-contract when he was 15, they had a good eye on him for a while before he signed.

“The way he was treated the first time he was at Carrington convinced him this was the right place for him.”

The 16-year-old made his 10th Premier League Under-18 appearance of the season against Sunderland and embarrassed one of his opponents, pulling off a remarkable double nutmeg in the space of 10 seconds.