Watch: Are Manchester City players being targeted by dangerous tackles? 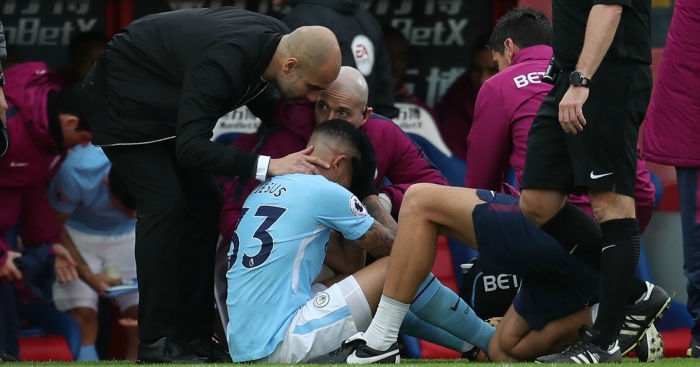 Manchester City ended their match with Crystal Palace doubly disappointed, not only with the draw but with injuries to Gabriel Jesus and Kevin De Bruyne.

But in their last four league games – including Puncheon’s high challenge – Pep Guardiola’s men have been on the end of four nasty tackles.

Two came in their match against Tottenham, firstly when Harry Kane went in on Raheem Sterling with a lunge with studs showing.

Then, definitely more dangerous and possibly with intent, Dele Alli went in with a stamp on De Bruyne, a challege which Guardiola was particularly angered by.

Both were awarded just yellow cards, and in their match with Newcastle, Jacob Murphy’s high tackle on Ilkay Gundogan miraculously went unpunished.

All four can be viewed in the video below, which raises the question whether referees are giving City’s players enough protection from potential serious injuries.