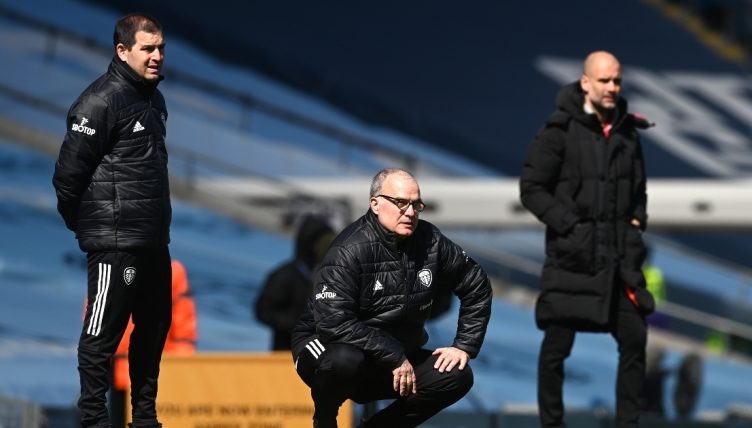 Marcelo Bielsa couldn’t help but laugh after Leeds United won 2-1 away at runaway Premier League leaders Manchester City, scoring with their only two attempts at goal.

Leeds didn’t play with their usual style at The Etihad as Pep Guardiola’s men dictated possession and territory, and it became something of a backs-to-the-wall approach after Liam Cooper was missed.

A well-taken Stuart Dallas effort shortly before the break gave Leeds the lead, somewhat against the run of play, while they were really put under pressure after club captain Cooper caught Gabriel Jesus with a challenge that was deemed to have excessive force after winning the ball.

But Leeds defended doggedly and determinedly, spending large periods compact in their own third of the pitch, while they always carried a threat on the counter-attack – even as City went in search of a winner following Diogo Jota’s equaliser.

City had a let-off when Ederson came out and denied Raphinha with a superb tackle, but they didn’t heed the warning as Dallas was played through in injury-time.

Speaking in his post-match interview, Bielsa was his usual magnanimous self: “We deserved to win,” he said, chuckling as his translator gave his answer in English.

“But the fair thing would have been for City to win.”