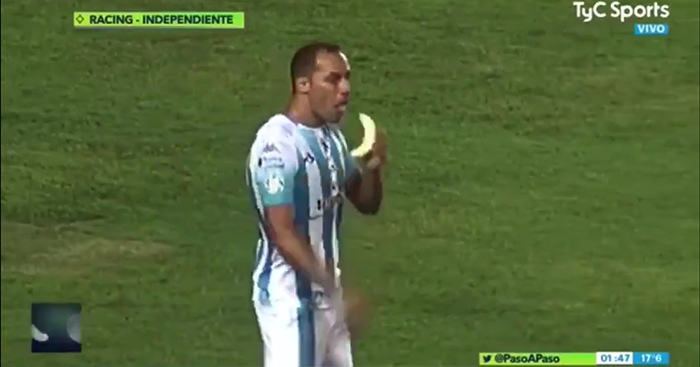 It’s not uncommon to see a player taking on supplements on the sidelines these days – but we can’t ever recall one walking around the pitch eating a banana.

Well, we’ve seen it now. Marcelo Diaz was handed a banana as he took on tactical instructions during Racing’s clash with Independiente in Argentina on Sunday, and the Chile midfielder was not exactly in a rush to eat it before play restarted.

Diaz even took a free-kick for his team before chasing after the ball with the banana still in his hand. Eventually, he finished it and did what everyone does after they finish a banana – rub the residue off his hands.

There isn’t really much else to say…apart from the fact that the energy boost clearly worked, with Diaz scoring what proved to be the only goal of the game four minutes from the end. When Racing were down to nine men. Against their biggest rivals.

Yeah, we’re going to eat more bananas from now on.

13 things we loved this weekend: Eriksen, Payet, Can, Milner & more