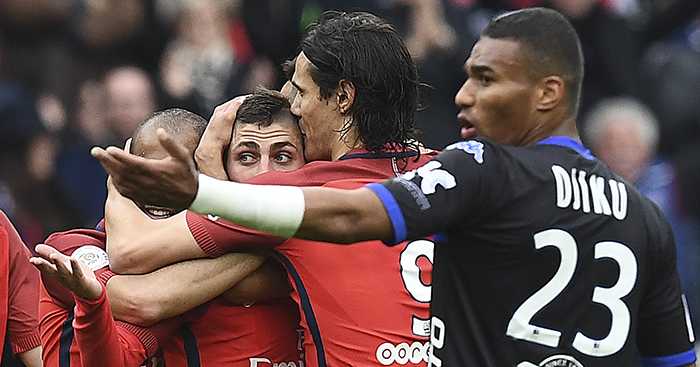 Marco Verratti scored a brilliant goal in Paris Saint-Germain’s 5-0 win over Bastia on Saturday – but it was more than a tad controversial.

Verratti notched PSG’s second 10 minutes before half-time at Parc des Princes, but Bastia’s players were far from happy with the hosts for continuing to play as goalkeeper Jean-Louis Leca checked on Blaise Matuidi.

Matuidi had gone down in Bastia’s penalty area moments earlier, but rather than allow their team-mate to receive treatment when the ball went out of play, PSG took a quick throw-in.

Julian Draxler was also in the box as Verratti received the ball, seemingly asking for it to be kicked back into touch, but Verratti instead fired in a sensational 20-yard effort from the corner of the box which caught Leca off guard and out of position – though whether he would have been able to stop Verratti’s shot even if he had been set correctly is open to debate.

Watch the goal below and decide for yourselves.

Lucas Moura had scored PSG’s opener three minutes before Verratti’s goal, with Edinson Cavani adding a brace – and missing a penalty – either side of Marquinhos’ chip.

PSG remain second in Ligue 1, three points behind Monaco and having played a game more ahead of their rivals’ clash at Nancy.