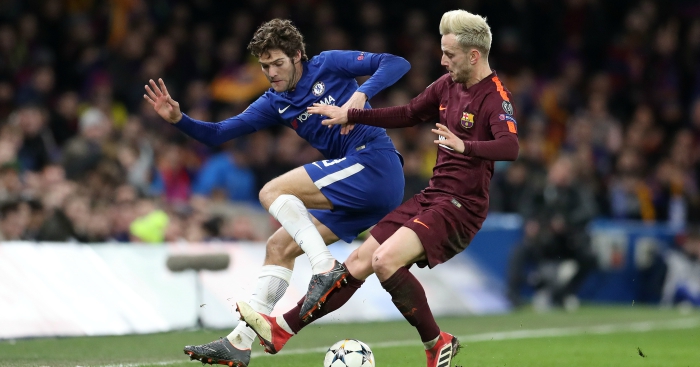 Chelsea earned a credible draw with Barcelona in the first leg of their last 16 Champions League tie on Tuesday night.

Willian opened the scoring with a fine strike around the hour mark, but the Spanish giants equalised through Lionel Messi after a mix up in the Chelsea defence.

The two teams reconvene at Camp Nou in three weeks’ time with it all to play for as they aim to earn a place in the quarter-finals of Europe’s premier competition.

However it wasn’t the goals or a particular piece of play from any of Barcelona’s stars which caught our eye in the entertaining clash.

No, it was Chelsea’s “complete forward” left-back Marcos Alonso, who grabbed our attention with a wonderful piece of individual skill.

He chased a loose ball towards the touchline and performed a phenomenal Cruyff turn to skip away from Ivan Rakitic, nutmegging the Croatian in the process, drawing a foul as a result.