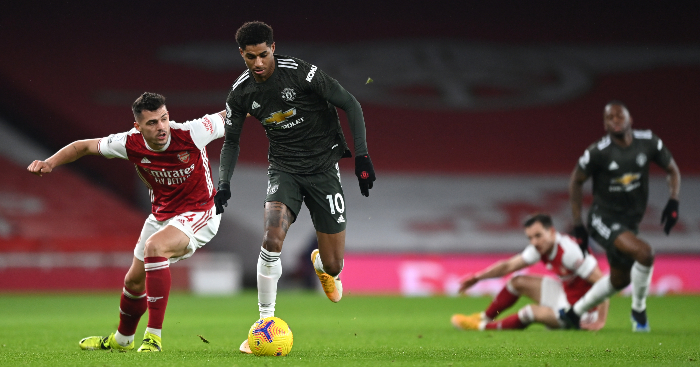 Manchester United travelled to Arsenal on Saturday evening for their second clash of the season amid what is becoming a thrilling title race in the top flight.

But a 2-1 loss to Sheffield United in midweek really set Ole Gunnar Solskjaer’s side back in their efforts and following that with a 0-0 draw against Arsenal will not have done much to calm fans who fear their challenge is dwindling.

The Red Devils will most likely come away from North London feeling like they should have taken all three points, with plenty of great openings spurned by the front-line.

But it was not all doom and gloom. Marcus Rashford at least gave Granit Xhaka something to feel embarrassed about midway through the first half.

Picking the ball up on the right-wing, the 23-year-old squared up to the Swiss midfield enforcer. A little shimmy and Xhaka offered the necessary opening for Rashford to slip the ball cooly through his legs and onto the other side.